Being social with social media

Here’s a great example of how a BtB company can use social media, not just to communicate their key messages, or put their press releases out, but to actually be social.

Recently at AAPS in Chicago (reference earlier post), Metrics personnel were manning their booth in the late afternoon. It had been a long day, but it wasn’t over yet. Still to come was a cocktail reception on the show floor, followed by a night of entertaining clients.

Everyone was tired and restless, and they were getting a little punchy.

It turns out everyone had also made the rounds and collected quite a few giveaways from some of the area booths. And the favorite item turned out to be a pair of neon green and black Ray-Ban style sunglasses. So we snapped some pics and shared our “gang” with the social folks at AAPS via twitter: 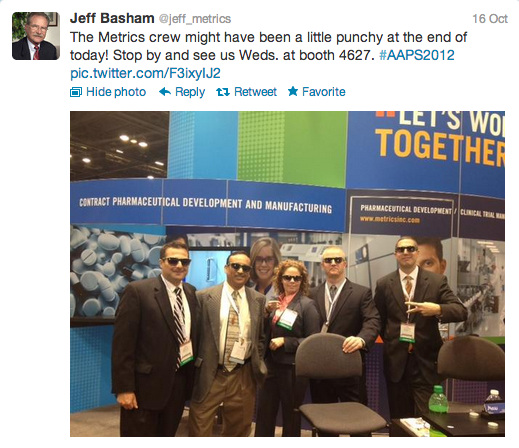 Turns out folks actually READ that stuff! Not much later, a visitor to the booth commented on the cool picture we posted.